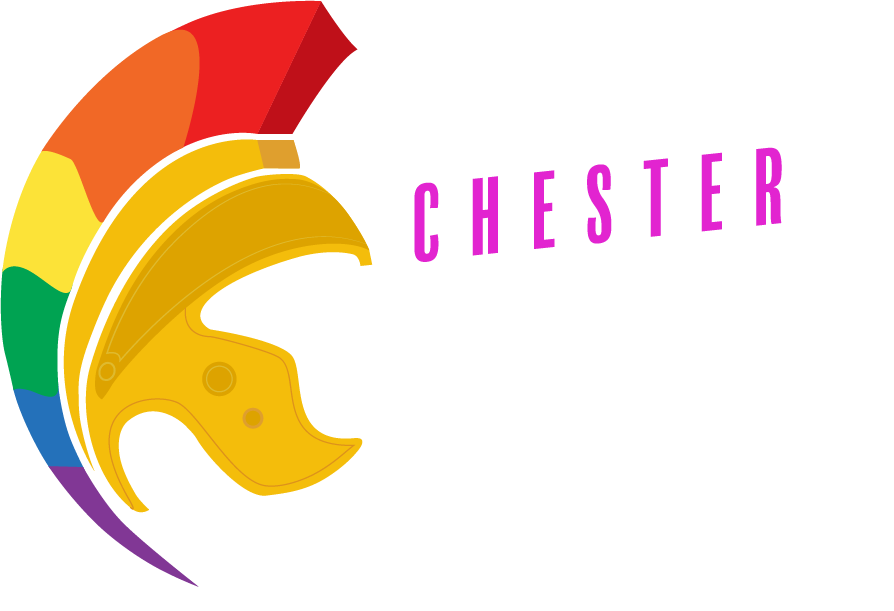 THE FESTIVAL
OF CHESTER
PRIDE

A piece of research was completed by Cheshire West and Chester Council with LGBT+ residents following the introduction of the Equality Act 2010. The council wanted to understand more about the issues and needs of the community. There were a number of themes in the research, including homophobia, heterosexism and visibility. A group of students from Chester University (along with some none students), also organised an event in 2011, but that had no affiliation with the Chester Pride charity as we are today.

This piece of work informed a Partnership Equality and Diversity Group that was running at the time. The group expanded its membership to begin to focus on some of the actions that could be put in place from the research in regards to the issue of LGBT+ visibility, and specifically the desire for a Pride event. The group included Cheshire West and Chester Council, Cheshire Fire and Rescue, Cheshire Constabulary, University of Chester, Cheshire and Wirral NHS Partnership Trust, Body Positive, The Countess of Chester Hospital and LGBT Youth North West. In 2012 the group put on two events to begin to engage with the LGBT+ community – Love Music, Hate Homophobia (which featured music and exhibitor stands) and a Walk of Light for World AIDS Day.

The group organised its first Chester Pride, which took place in the October in Town Hall Square. This was attended by approx. 2,500 people and featured a stage, exhibitor stands in the Town Hall (Health, Life and Wellbeing Zone) and a few pop up market stalls. Leading up to the event the group was expanded again and two representatives from local LGBT nightlife joined the group.

Now that Pride had gained some momentum, Chester Pride moved away from being primarily public sector organisation run and was set up as a charity run by volunteers, led by Helen Pickin-Jones and David Redpath-Smith (both were on the previous group but continued as volunteers). Due to higher numbers than expected attending in 2013, we needed to find a new location, so Chester Pride was held in Grosvenor Park. Due to public demand, we decided to add a Chester Pride parade through the city centre which was really well received. We also added a Youth Zone, a second stage for cabaret, and a viewing area for those with a mobility impairment. Approx. 5,500 people attended.

The decision was made to move Chester Pride to a hard surface due to possibilities of cancelling the event in torrential rain, so the event took place at Castle Square Chester where it has remained. A third stage was added for local bands called the Original Music Stage and a Childrens’ Zone and funfair.  The Health, Life and Wellbeing Zone was doubled in size providing space for around 60-70 exhibitors. Approximately 8,000 people attended.

The second Chester Pride event in Castle Square. The area for those with a mobility platform was turned into a raised platform and a VIP area was introduced. The Chester Pride exhibition ‘Pride in the Past’ was also displayed. 6,000 people attended due to heavy rain.

Celebrating 5 years of Chester Pride. An Older Peoples’ space was introduced, an ‘Alcohol Free Chill Out Space’ featuring non-amplified music that was autism friendly, and a baby and feeding tent were also added. The event was moved to August and approximately 10,000 people attended.

Firmly set in our new home of Castle Square, Chester Pride saw it’s highest attendance figures of around 15,000 throughout the day. Our parade increased in size and more focus was made on our plastic consumption, which we are working towards reducing even further in 2019/2020.

Lots of changes have happened within the committee, with our previous Chair Helen Pickin-Jones and directors Jenna Pickin-Jones and Sam Platt (also Vice Chair) all deciding to step down after their own successful terms at Chester Pride. Warren Lee-Allmark took over as Chair for 2019 and plans are already being put in to practice to continue to grow Chester Pride and adapt, whilst not forgetting it’s history.

Chester Pride continued to focus on its charitable projects after Covid-19 restrictions cased doubt on being able to hold a physical pride event, although a number of fundraisers and a smaller pride event “Reflect and Connect” are planned for 2021 to help us fundraise ahead of our big return to physical events in 2022, where Chester Pride will celebrate it’s 10th Year. We are also in the process of opening our own Café and Community Safe Space after a successful crowdfunding campaign.